I’ve got a family of foxes living under my shed! What a treat! A veritable gift from God during these trying stay-at-home days! They’ve kept me enchanted, and I’ve been trying to get good video of them regularly. The mom is quite nice looking and seems healthy. She comes at least twice a day, and the kits rush out and nurse on her while she’s standing there! She often picks at them, probably cleaning them. Since they have gotten bigger, a few try to follow her when she trots off into the woods. The road running right by the small area of woods is scary. I’m afraid one or more may venture out into the roadway! Can’t bear the thought!

None of my pictures are on this computer, yet, but I’m going to post some of them later today.

Today, I woke up early, and walked the dog in a terrific downpour, picked up the newspaper, and grabbed my coffee and ipad for a first look at the day. It’s now sunny and sweet, but then, it was still dark.

For some odd reason, I clicked on a link somewhere that took me to youtube and food videos. Wisconsin’s famous butter burger first. And after licking my chops I went on to a video about different types of tenderizing to use on steaks, and could taste those trial steaks. I swear. Then, Navajo fried bread, umm umm, and on to English muffins, made in a huge cast iron skillet.

I used to have a huge cast iron skillet! Sent it with the kids when they moved to Arizona. But those muffins looked mouth watering good!

Now, when I should be thinking of folding laundry, and once again attempting to get this sewing machine working they way I’d like, I have food on the brain. What will supper look like tonight? Anyone’s guess.

This is my first block using the block editor…or I should say, the second, as the heading, or title is a separate block. I have to learn how to use these blocks to display what I want here the way I want it. Just took a short Yoast course in how-to, and I realize doing is the best way to learn. So, I’m practicing.

This is a good way to make something stand out.

This is also an experiment. To see just how a drop cap will display once I’ve written a whole paragraph. This is something I might use should I write a poem or post one that I like. 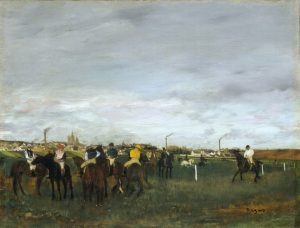 Long ago, I was an art student, and a racing fan, both.  Each year, we’d make an annual trek to Saratoga Race Course, in beautiful Saratoga Springs, NY and enjoy a few days of serious racing and the Midsummer Derby as it’s known, the Travers Stakes.  Back in 1983, the same year as Secretariat’s appearance there, another chestnut speedster of 3 yrs was also there.  Spanish Riddle.  So blindingly fast he set the track record, indeed, one that has only once been equaled and never bested, until late 2019.

His was a sad story, because as fast and wonderful as he was, he broke a foreleg in a workout right there.  His situation was dire, and his handlers who loved him so, decided to save his life, constructing a special boot to replace his leg, and he was retired to stud right then.

He stood first right on Rt. 9 just a bit past Hillsboro, VA at a lovely spread called the Virginia Stallion Station.  If there were other stallions there, I never knew.  But, I loved horses, loved Spanish Riddle, and loved painting, so one day I dared to ask, by phone, if I could come down with my camera and take a picture of him, intending to attempt to do a classic portrait of hiim. One that would show him as equal to some of those on display at the Racing Hall of Fame in Saratoga, one of my favorite haunts.

By this time, I knew and understood from conversations I’d overheard, or directly participated in myself, that horsemen are notoriously critical of horse artists, and pick them apart freely.  They live with them, love them, handle them daily, and no artist could ever make a good enough painting of their loved fabulous champion.  I knew this.

I arrived with my camera and was greeted by Mr. Stanley Greene, the stud manager, who bragged about his charge, brought him out with pride, and had his groom hold him for a classic pose.  I had chosen a perfect time of day to capture light on his shining coat, and posed him with the sun over my shoulder, getting a few really good shots.  Where these pictures are now is anyone’s guess.  Ugh.

They were nice, accommodating, and just a tad condescending, as I expected.  I wasn’t imagining their skepticism and doubt in my abilities.  After all, I was just a student at a community college.  All true.

I worked on the painting for about three weeks.  Using oils, I realized I had picked great light and shadows were just right for a classical portrait similar to those found in the museum, or galleries in Middleburg, where I liked to lunch on occasion to look at horse art.

Using several transparent layers, I thought I got the colors just right, and as soon as it was dry enough, I thought I’d go see if I’d done a good job or not.  Well, the best judges of that of course, would be his people, his tenders, the people who loved him. So I called, and asked if Mr. Greene would like to see it.

“Of course, come on down and let us see it,” he replied, chuckling.  I’m sure he thought it would not be much.  They did love that horse!

Well, I went out one day in the afternoon, with the painting framed, and covered with a blanket.  I was greeted warmly, and invited into the barn office where Mr. Greene had his desk, a few chairs, some art prints hanging on the walls, well lighted, including Degas’ The Races, which is world famous.  It took up a very prominent place across from his desk.

I placed the covered painting on a chair, and he and his groom got ready to see my portrait of Spanish Riddle,  furlong track record holder at Saratoga Race Course, champion sprinter, so  removed the blanket.

The smiles disappeared from their faces in an instant.  They just stood and stared at it.

“You gave him back his leg!”

Yes, I had.  They could think of nothing to say.  I asked if I’d done a good job, and what did they think of it.  They dissembled, hemmed and hawed, and said it was terrific!

I was so pleased by this reception, by their obvious appreciation, that I perhaps stupidly said, “If I were to leave it here, where would it hand?”

Mr. greene immediately rounded his desk, and took down Degas’ The Races.  I said, “OK! It’s yours.  Take good care of him!  He’s a super champion!”

And they were so happy!  I was so flattered!  How could I not be?  I left it there with his people in his barn and will never ever forget Spanish Riddle.

My one regret was I forgot to even take a picture of it!  Stupid, stupid.  o idea where it might be now, either. Spanish Riddle after a few years foundered and had to be put down.  Virginia Stallion Station moved to the Middleburg area, and I lost touch immediately, my goal having been accomplished anyway.  I doubt Mr. Green who was middle aged at the time is still managing a stud farm somewhere, unless it’s in heaven.  The painting is forever lost.

But the memory lives, in my heart, and so does beautiful Spanish Riddle and his people.